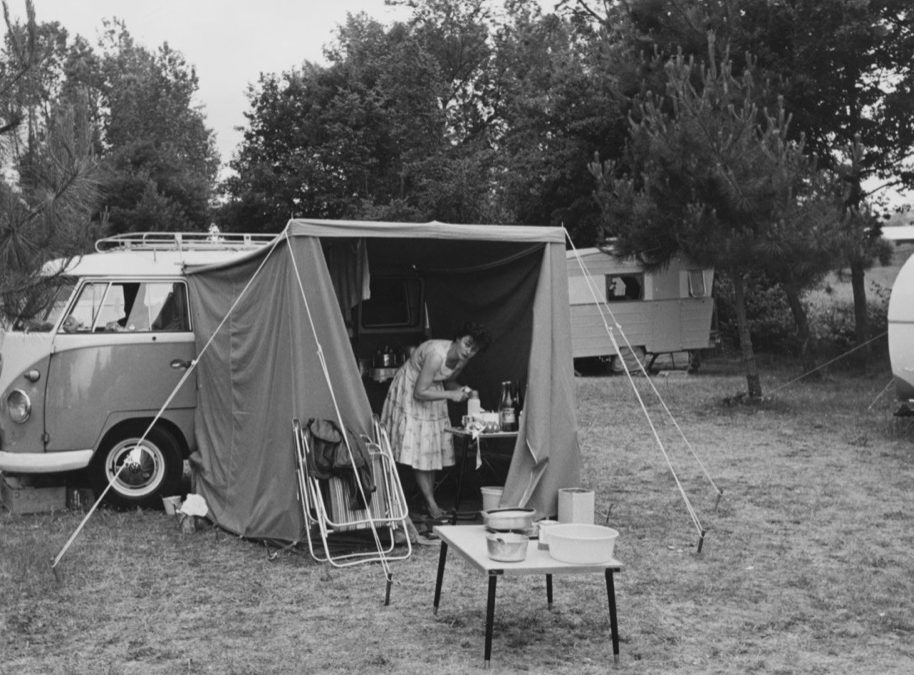 “Adam, would you do me a favour?” said Jill when he stopped in one afternoon late in the summer. Jill ran the campground office for him. “Would you watch the office for a half hour? I need to jump in the lake and cool off before I melt.” A few minutes later, Adam watched out the office window as a Cadillac pulled up, towing one of those new tent trailer things. The bell above the door jangled as the lanky man who’d crawled out from behind the wheel came into the office, his wife and kids in tow. “I sure do hope you have a camping spot we can rent. I need to get these kids off the road and into the water. Everywhere we’ve stopped has been full up.” The man rubbed his face with both hands and then smiled. He had an honest face. Adam smiled back, then studied the campsite map for a moment. “You’re in luck. We have exactly one spot left.” The boy and girl standing on either side of their mother just inside the door were watching him shyly. They were a few years younger than Frank. Adam directed his attention to them and said with a grin, “And it will take you about three minutes to walk to the lake from here and jump in.” He was rewarded by timid smiles in return. Good looking kids, he thought. Adam turned his attention back to the dad. “It’s this one here, number 17,” he said, pointing to the map.

Ten minutes later, the bell jangled again. Adam looked up from the newspaper and glanced at the faces of the two men standing in front of him. “Can I help you?” “Well, there’s a bit of problem in the campground,” said the guy on the left, casting a look sideways at his buddy, then back at Adam. “There’s a coloured man putting up a tent in the spot in between us.” “And what’s the problem?” Adam asked in a curt tone. “Well, we paid to have a nice camping holiday with our families, and it ain’t right to have a coloured man camping beside us.” “And it’s a white woman he’s with,” the guy’s friend piped up. “That ain’t right either.” Adam stood up. “Well, I still can’t see what the problem is. You both have your spots. The spot in between was available, and now I’ve rented it to a family who also want to have a nice camping holiday. There’s nothing left to discuss. Enjoy the sunshine.” Adam sat back down and re-opened the paper. After glaring at him for a few moments, the two men turned and stomped out of the office, sputtering to each other.

What now? Adam thought a few minutes later as he emerged from the back room where he’d gone to pour himself a coffee. A group of people was walking towards the office, five men and a couple of wives. The two men he had just sent away were among them. Adam put his coffee down on the desk and went outside. “What’s this?” he asked, walking towards the group. The same guy that had spoken first before, spoke again. “I told you, we don’t like having that nigger and his white woman in the same campground. We’re going to leave if you don’t get rid of him.” “That’s ridiculous. No one is doing any harm. What problem are they causing you?” Adam spoke in a measured tone. Another guy from the group spoke up. “We’re white. He’s coloured. It’s pretty simple. And if you are running a respectable establishment here, then I’m sure you understand the problem and will remedy it.” Adam felt his face getting hot. Just then he saw the Cadillac driving slowly out of the campground, back towards the office. “Well it looks like the problem is resolved,” said the first guy. “Thank the good lord,” said one of the women. “We don’t need any more unpleasantness, now do we? Let’s all get back to relaxing. Come on boys.” The posse turned in unison and scurried back in the direction they’d come as the car pulled up to the office. Adam glared after the group, doing his best to keep his temper in check, then turned and walked toward the office where the man was climbing out of the car. He could see Jill at the desk. She must have returned while he talking. “I’m sorry if we’ve caused any problems,” said the man in a resigned tone. His family didn’t bother getting out this time. “We’ll get out of your way, if you’ll be so kind as to refund our money. We’ve left the site tidy,” he said to Adam. “You haven’t caused any problems at all. Not one. And those people will not tell me how to run my campground. I would appreciate it if you would do me a favour and stay.” The man’s gaze locked onto Adam and his eyes got a little wider as he listened intently. “It would make me very happy for you and your family to enjoy our facilities here and our beautiful lake. I will straighten this out once and for all, and I promise you won’t hear another word about it. Do we have a deal?” “Well…,” the man hesitated, studying Adam’s face, then his face broke into a shy smile. “All right, yes, we’ll stay. Thank you very much.” He held out his hand, and Adam gave it a firm shake. Adam leaned down and looked into the open back seat window. “You kids get back to that camp spot, and get your bathing suits on and get over to the lake, okay?” “Okay!” they chimed together, grinning. “I’ll be right back,” Adam said to Jill where she was standing in the office doorway listening to the conversation. As the man turned the Cadillac around, Adam strode through the campground and stopped near the center. “I want everybody to listen to me,” he yelled, then waited a few moments as people put down what they were doing. Some got up and walked a few steps toward him to listen. “Those of you who don’t want to stay here are welcome to leave. Just pack up your things and clear out and I will be happy to refund your money. But this guy,” he paused and pointed to where the Cadillac was inching into the allocated spot, “is staying, and his family is staying. Tonight and for as many nights as they would like. Does anyone have any questions?” he stopped and turned slowly in a circle, silently daring anyone to speak up. No one did. “All right then. Everyone that is staying, have a good time.” And with that, Adam turned and walked away. “Well boss, how did it go?” Jill asked when he reached the office. Adam grinned at her. “I haven’t had that much fun in a long time. Maybe I should watch the office more often!” No one left the campground that day or any other day, until their holidays were over. And no more was heard about the family in spot 17.