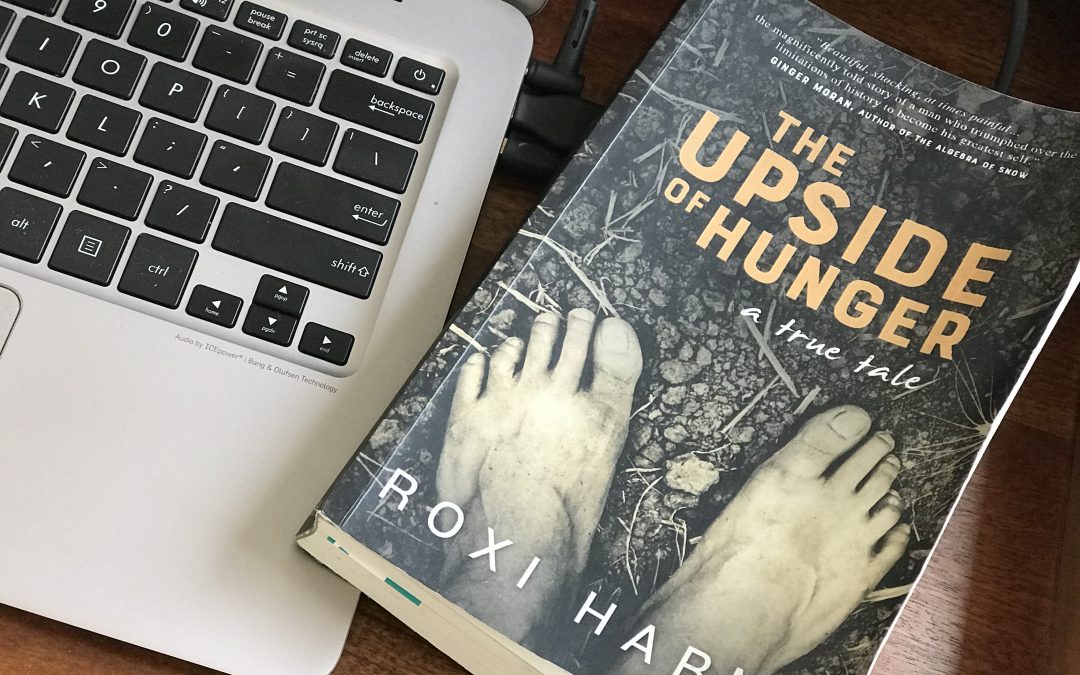 Ginger: Your book, The Upside of Hunger, has recently been published. Can you tell us about the book—what is the genre?

Roxi: My debut novel, The Upside of Hunger, is a true tale based on the life of Adam Baumann. Adam has recently turned 90, and has led an extraordinary life, beginning in a tiny village on the border of Hungary and Romania, surviving World War II as a team soldier, and struggling to reunite his family in a war-torn Europe, to immigrating and building an amazing life in Canada filled with one challenge and adventure after another. Genre? I am never sure how to answer that question. Bookstores file it under fiction, yet it’s a true story. But it’s not written as a biography, and it’s not a memoir because it’s not my story. So I suppose it’s a tale about the strength of the human spirit, set in the mid-1900s, based on a true story.

Ginger: What is the book about—where does it take place, who are the main characters, and what is the central conflict?

Roxi: The book takes place from 1930 to 1980, primarily in Europe, beginning in hungry and then Germany, then moving to Canada. The main character is Adam, an extraordinary boy born with an exuberance for life and an unwillingness, no, an inability, to live within convention. He just “does” what he wants, seeking adventure at every turn but always doing the right thing to help and protect others, without regard for consequences.

Ginger: Have you always wanted to write a book or did this story in particular inspire you?

Roxi: I have had, in the back of my mind for many years, an aspiration to write a memoir, but it was really meeting Adam and hearing his life story that inspired me to actually sit down and write.

Ginger: Although the book is historical, do you think Adam’s life and character have lessons for us today?

Ginger: What authors inspired you to be drawn to this particular story?

Roxi: Hmmmm, well I’ve always enjoyed historical fiction and memoirs. I love Ken Follett’s books and almost anything by James Michener. I love hefty books with characters and story lines you can sink your teeth into and enjoy for a while, rather than quick reads that are over just as you start to enjoy them. Having said that, I’m not sure any particular author inspired me relative to Adam’s story. It was Adam who inspired me, truly.

Ginger: I happen to know quite a lot about the process because I was there for a part of it, but I’d love to hear the whole story. What did you do when you first started writing? Did you take classes? Have readers? How much research did you do?

Roxi: I took a few little online courses on character development, dialog writing, that type of thing. And I had some grad students at our local university read and give me feedback on some of my early work, which was helpful. I conducted over 400 interviews with Adam, all recorded, then I had a few friends and teenage kids of friends type them for me, so I could organize all the info from Adam into Scrivener by topic and year. I think I had about 2,200 pages of notes at that point. And I did a ton, and I mean a ton, of research on the Internet, because I soon realized I actually knew very little about the events and geography of Adam’s story. All I knew was the common, basic text book version of WW2 that we learn in school. And that was when it became really interesting, learning about some new aspects and events about those decades.

Ginger: What frustrations did you run into? Why did you decide to hire a writing mentor?

Roxi: I knew, or I should say I sensed, from early on that there was a big gap in my knowledge about writing. I was comfortable with the technical parts like grammar, etc. and some of the craft pieces like work building and character development, but I didn’t know about story arc or narrative authority. I actually didn’t even know those terms until after I worked with you, but I knew I was missing a big piece of the big picture of how to structure the story.

Ginger: What was that process like and how long did it take?

Roxi: I worked with my writing coach [you] for about 18 months I think, which included a couple of short breaks when I put my book aside for a couple of months. It was a great balance between guidance and coaching and then being pushed to apply what we’d discussed on my own and figure out what it meant for my story. People ask me who my editor was, and I tell them proudly that I did my own editing, but of course I had help getting started with each of the editing phases, with a lot of teach me/show me stuff before I did it myself on the editing stages I was least familiar with.

Ginger: I know you learned a massive amount while writing this book—about Adam Baumann, the time period in both Europe and Canada, and about writing a book. Focusing on the writing, could you give a top five tips on what you learned about writing?

Ginger: What were some of the satisfactions of writing this book?

Roxi: I go to bed every night glad I captured Adam’s story and didn’t let it get lost like so many have. And getting feedback from readers around the world regularly saying how much they love Adam’s story is amazing!

Ginger: How did you choose the title and the cover—they are very striking!

Roxi: Title… just lots of brainstorming and discussion with friends, and not rushing it. That was hard. I had lots of possible titles early on that wouldn’t have been good at all. The cover… thought hard about the story and started toying with ideas, doing photographs and having artist friends do sketches. A lot of them had to do with feet for some reason. Adam’s daughter found the image we finally went with, and I played with filters and colours until I was happy with it. Then I worked on title placement, arrangement, font, colour, etc. I also attended a few cover design workshops online for ideas

Roxi: My career involved a lot of marketing and reaching people. I’m still figuring out the most effective ways. Of course, you started me off on one of the most important elements, which is email marketing and building the email list. But social media has also been important, and doing it in ways that connect people to the story. That’s what it’s about – telling a story, not selling a book. Then of course, there is showing up in person. I love getting out and talking to possible readers, and I’m not afraid to call book stores, radio stations, newspaper editors, etc.

Ginger: You have been traveling the world marketing The Upside of Hunger. Where have you been? Is it received differently in different parts of the world?

Roxi: So far I’ve been in western Canada, United Kingdom, and across Australia personally. And I have Amazon sales in the other parts of Europe, New Zealand, and South Africa. I think Adam’s story has been received pretty consistently in all those places. It’s a human story about living through difficult and exciting times in history, surviving, persevering, and thriving.

Ginger: What have been the best and worst parts of this process for you? What surprises were there along the way?

Roxi: It took longer than I wished it had. I wish I’d connected with you a year earlier than I did. But then, maybe I wouldn’t have been ready. I’m surprised at how well it’s selling. I mean, I guess I’m not really surprised, now that I’m here, because Adam’s story is a great story, but I only set out to preserve it. I had no idea it would be widely appealing. In December Upside reached #9 in its genre on Amazon Canada!

Ginger: What do you wish you’d known when you first heard Adam’s story and knew you had to write a book about it?

Roxi: About writing a shitty first draft, and not worrying about good writing or structure in the first draft.

Ginger: I know you’ve invested quite a lot of time, energy, brain cells, and actual money in this process. What made it worth it?

Roxi: Hearing that readers can’t put it down and read it in a few sittings even though it’s almost 500 pages. “I couldn’t put it down,” is the most common comment I get. That and that Adam has inspired them to be more adventurous, more daring, more caring, any number of “mores.”

Ginger: And finally, what stories have you heard, imagined, or lived that sparked your interest in writing another book and when do you get started?

Roxi: There are some pretty crazy stories from my own life which may bear telling when the time is right.

To learn more about Ginger, visit her site below…

Case Study: The Upside of Hunger by Roxi Harms

Roxi’s story shows the three steps I’ll be teaching next week in a free webinar on how to succeed with a book:

1. Have the courage of your convictions–if you think you have a story that should be told, go forth and tell it!

2. If you want to tell it well, learn the craft. Yes, that takes time and effort. It is worth it.

3. Learn to market–it isn’t as hard as you might fear!

Sign up here for information about how to tune in to free webinar.